The other night, I was sifting through the myriad of photos in my collection  to find specific pictures for my son’s upcoming wedding (as per his request). I am not as organized with pictures as I am with the rest of my life and thought to myself, why not apply those same skills to these boxes of photos?

We were not big on photography but managed to have a decent amount of photos documenting our lives and our children’s growth throughout the years. I discovered several empty photo albums which will be a great incentive to organize them by child and the family in general.

My face was constantly smiling as I was reminded of the events of years gone by. Thank goodness for technology as I was able to scan many pictures and crop out photo-bombing strangers throughout the years. Suddenly, in a large cardboard folder, I pulled out a picture that took my breath away….

So what was the picture that temporarily halted my activity?

The setting looked almost tropical with a newly-built gazebo that appeared on the right side of the framed picture while plants filled the backdrop with ease. This could have been mistaken as a picture shot in Hawaii or someplace similar, I recognized it as my parent’s backyard nearly thirty years ago. My father was very handy and loved to build things around the home. He was an engineering draftsman for a large utilities company so I am sure he had drawn the specifications of this custom-built gazebo that would last for years to come. In fact, that gazebo still stands in their backyard today!

However, that was not what took my breath away.

The weather in San Francisco was unusually pleasant that afternoon in March. The focus of that picture was of the newly-married couple enjoying the gazebo area.  His left hand gently held onto her right hand as she descended off the one-step platform. His right hand was extended with a determination to safely guide her off the gazebo. Her eyes were focused at the photographer as she flashed her wonderful smile which could brighten anyone’s day.

The groom was dressed in a black tuxedo tailcoat and he wore a small gold coin around his neck. The beautiful bride was adorned in the traditional long red silk dress and she wore several shiny gold pieces of jewelry that were received during a traditional, yet modernized, Chinese tea ceremony to honor the groom’s parents. Though it was America, the couple wanted to keep a few traditions in place to honor their Asian heritage.

In addition to the elegant clothing was the innocence that beamed in our faces. We began our marriage with honor and grace. I remembered that day very well and the memories flooded my mind like the roaring ocean waves upon the shore at Ocean Beach.

As I stared at that picture, a question popped into my head – Would I have married her knowing the outcome of her death by cancer only a short twenty-three years later? The answer was an emphatic YES!!!!

I would not have traded my life for anything in the world, After all, we were blessed with two wonderful boys and a lot of adventures together. The outcome was not what we had hoped for, at least not so soon. Yet, it is with purpose that I share our story of hope with others through my book and speaking engagements. To impact the lives of others is extremely rewarding and purpose-driven.

A stroll down memory lane can be painful sometimes but in most cases, it is very pleasant and much to hold onto. I have new memories now but will never forget those I have filed into that old brown box. 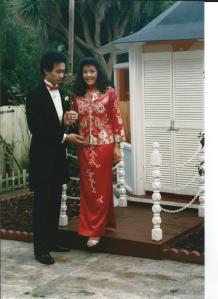