Dropped by a local city the other day and was pleasantly surprised to meet one of the new officers – my son!!!

He has finally passed his field training and is now a new addition to a squad of fine public safety officers. Unlike what the news portrays police officers to be, there are many, many public servants in the “blue” that actually do GREAT work for their communities and the people they serve!

Unfortunately, it is the few that command the most attention from the news media.
Why? I believe it is because this world loves negativity due to the various electronic outlets and terrible tabloids that encourage such a culture. OK, I’m getting off my soap box now.

When I took this picture of my son, it takes my mind back thirty years ago when my own brother first began his law enforcement career. We happened to live in the same city he was sworn to protect. Excited about his new job and being in his own car, he would occasionally drop by on his lunch break for a quick home-cooked meal. We had a puppy Shih Tzu which loved sitting in the police car though he was not big enough to be categorized as a “police dog.”

Anyway, there are some images that are impressed into our mind that lasts forever and their triggers will recall those memories rather quickly. I love how our brains are faster than any man-made computer. Needless to say, the image of my brother was recalled that day when I saw my own son as the next generation of loyal, faithful police officers sworn to protect and serve!

Well done my son! That city should be proud to have such a man of integrity on their streets to protect them while they (the citizens) go about their daily business. This job is sometimes “thankless” so if you feel the urge in your heart to do something kind for someone today, introduce yourself to your local police officer and say “thank you for your service.”  The term “5-0” should be a positive term in this negative world.

In this day and age, these fine men and women in blue need our support and love. 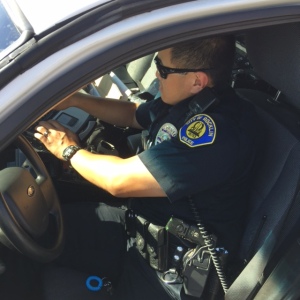