We arrived an hour before the doors would open knowing that this would be a sold-out event (as it is every year). We found a parking spot close to the entrance and the weather was beginning to warm up. It was projected to be in the high-90’s or even 100’s in a few hours!

I asked my wife to stay inside in the line while I go outside to look for our family members to give them their tickets. Hopefully they would arrive soon as the sun was already increasing the temperature within a matter of minutes. Good thing my wife was comfortable inside the air-conditioned lobby.

The first of our guests arrived and I escorted them into line where my wife was standing. However, due to the hot weather outside, everyone was jamming into the lobby so that it became hotter inside than it was outside. I forced my way out of the lobby to continue to wait for the other family members.

The line snaked into the parking lot as more guests arrived. The doors were to have opened by 9:30am but for some reason, no one was being allowed to go inside. Guests were sweating and everyone tried to find whatever little bit of shade they could as the heat was hitting the high-80’s already (in a matter of only an hour)!

My guests arrived and I was able to give them their tickets. Unfortunately, we waited outside with everyone else as the lobby was simply too full to allow others to squeeze inside.

Finally, the doors were opened and people filed into only two separate lines. No matter-the commencement would soon begin for the 100+ graduates. The graduation started late as excited family members scurried to find the best seats. Luckily, my wife, older son, and his wife were able to save some seats for us.

The introductions of dignitaries were announced, music played, soloists sang, choral voices filled the auditorium, and speeches were delivered with passion and humor. It was very entertaining and certainly made the time pass quickly. Then came the most important of the morning – the graduation ceremony to hand out the high school diplomas!

Before long, we heard my son’s name announced as he stepped onto the stage and strolled toward the principal for the handshake and posing of the diploma for the camera person to snap that “perfect” shot. We shouted and hollered in acknowledgement of his accomplishment! What a proud moment that was for all of us.

As he stepped off the stage and walked back to his seat among his fellow graduates, an inner peace was felt.

Afterward, some of the family stopped by the house to enjoy some BBQ lunch (chef Dad was cooking in 100-degree weather outside). What a fun time as we did not have to deal with restaurants, parking, and being rushed out of our seats.  We wanted to make it low-key and relaxing for all.

Had this moment really happened? Have we made it through all twelve years of schooling at last? Do we have our last high school graduate among us in this family? Is this young man about to attend college in a few months? Are we about to become empty-nesters????

Well, not quite. He will be attending a local community college for his first two years before venturing out to the world to pursue his dreams and passion. In the meantime, he is off on an adventure of a lifetime with his friends and teachers as they are touring Europe and following the WWII historical sites.

So for now, good old dad has one less thing on his shoulder. I knew his senior year would be a blip in time but a part of me yearns for those simpler times of doing basic homework with him and talking about what life will be like when he grows up.

OK, I am back to reality now! Those days were fun (for the most part) but I am more excited of what life will become for our youngest son!

In the meantime, I hope he has safe travels throughout Europe and take a lot of pictures.

What a graduation!!! Well done Josh! 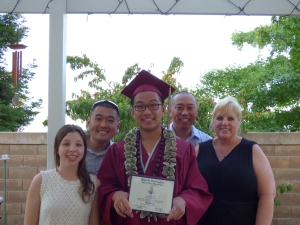