Rough Start To Our Vacation

Packing our suitcases, checking our list of necessary items for the trip, trying to stay healthy, and arranging for drop-off and pick-up transportation. All this for the start of our first cruise down the Pacific Coastline on the Grand Princess!

Excitement grew as each day drew closer to our embarkation date of April 1. Nothing was going to deter us from our wonderfully planned voyage. I was exceptionally excited as this would be my family’s first cruise ever! Finally, we could see what this cruising-lifestyle is all about.

Saturday morning arrived. We had to wait for my older son and his wife to arrive so that we can carpool together into San Francisco. Last-minute preparations and the loading of suitcases into the car with some extra room for their luggage.

My phone buzzed – it was my son calling probably to let me know they were almost here. Upon answering my phone, I heard the words that would deflate my enthusiasm.

Dad, we have a problem.

My car died on the freeway. We are safely pulled to the side of the road. I have called for tow service…

Ugh! Who invited Murphy on our cruise?????

We agreed that I would drive to their location to pick up my daughter-in-law and their luggage while he would instruct the tow truck driver to bring his car to my house (he was about 25 miles away but a lot closer than where they lived).

The time was 11:30am when we finally pulled away (two hours behind schedule). Too bad there was a local ballgame starting at 12:05pm in the same direction that we were headed (across the Bay Bridge). No worries – we were not leaving until 4pm but we wanted to be on that ship before 3pm, the latest.

The drive was stressful as I dodged and weaved through traffic. I reminded myself that I was on vacation and would leave behind my worries for the next eight days. Calming myself, I finally arrived in San Francisco. Almost there!!!

Driving onto the Embarcadero, I was now stuck in horrendous traffic. It was painfully slow and people were everywhere enjoying the sunshine and the local farmers market!!!

It took us another 45 minutes to drive about two miles but we finally arrived at the drop-off zone. We unloaded all the luggage and my family chose to wait for me while I rendezvous with my sister-in-law (who would pick up my car to keep at her house). Unfortunately, she and her fiancé were stuck in the same traffic so I had to stall by circling the Pier 27 area three times (choosing the slowest lane each time). I finally found a parking lot that though I was not allowed to stop there for too long, it afforded me the opportunity to make the swap.

Thank you! I shouted as I grabbed my phone and walked quickly to join the rest of the family.

Whew! We finally made it and now we had to check in our luggage. I happened to see another couple tip the porter so I reached for my wallet to set aside some money for our porter.

Where is my wallet?

I realized that when I had stopped at the parking lot, I set my wallet on the passenger seat but forgot to take it with me. Immediately, I called my sister-in-law who had to circle back through all that bad traffic (I’m sure she was not too happy with my call). I felt so bad that I had to make her turn around. We agreed to meet at a particular corner which was across the street from the pier.

I had the green light and she remained on the phone with me. She had her blinker on as she was slowly making the right turn. As I approached the car, she held out the wallet for me to grab as I proceeded to the corner. It was a smooth transaction and off she drove down the busy street once again.

As I pressed the button to cross back towards the pier, I realized how this may have looked to any other bystander – it was like passing drugs to a dealer! I smiled as I reached my family and telling them my story. We had a good laugh as we headed upstairs to the check-in line.

When we walked the plank and set foot onto the cruise ship, my stress was relieved as we were now finally on the ship. We just had to find the rest of the clan among the 3000 passengers and crew members.

That night, I reflected upon how our day began. Murphy was left at the curbside as we were about to begin our cruise vacation to celebrate my mother’s 80th birthday! 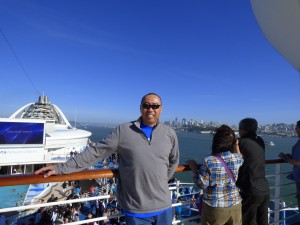