The overturned laundry basket blocked the path on the upstairs hallway. The smell of adrenaline and sweat permeated the staircase. The window blinds were closed to create the effect of nightfall. The overworked automatic dishwasher screamed for a merciful break from the evil taskmaster. The half-empty bowls and platters revealed evidence of a once beautiful meal.

Ah, Thanksgiving at the Gee’s house once again!

This was the first year we had hosted a party of this size. So many arrived with their gifts of food and love. It was a blessing to have family who got along with everyone else. That is a gift from God for sure.

First, there was the war of foods. We had to celebrate Thanksgiving on Saturday as my son was working the streets to protect the citizens on Thanksgiving night. We really appreciate the sacrifices many police officers make so that we can enjoy our freedom to celebrate our holidays.

So calm before the guests arrive. Cooking the turkey the night before allowed the juices to marinate into the meat for twenty-four hours. We have never tried this before (we have found our secret now):

Ding dong! One by one, they all streamed in with smiles, hugs, bags of food, and guns (will explain that later). We have never hosted such a large party before in our compartmentalized home. Somehow, we made it work: 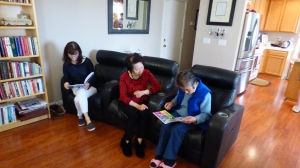 We cannot forget about the kids (including the 27 y/o who tried to blend in with them in the upstairs room). This was the calm before the storm:

Brunch was served and the food was devoured in the blink of an eye. Grazing was the activity of the day and more importantly, laughter and family time together (the kids were upstairs). 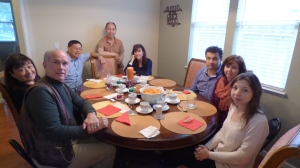 The two patriarchs sat in the family room where it was more quiet so that they could catch up with each other: 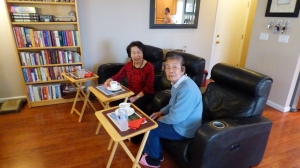 The kitchen left behind remnants of the many dishes (this is just the view of the center island – there was food on the stove and surrounding counters as well:

Of course, there were constant sounds of screams, laughter, and footsteps running up and down the stairs as the kids used Nerf guns in an all-out Thanksgiving Nerf War. I have learned to ignore what is happening in the battleground as these kids always had the decency to clean up the war zone afterward.

In the end, we all enjoyed plenty of food, fun, and sharing of stories. Where was everyone else? They were busy shopping at the crowded malls and local stores.

This was the best Black Friday/Weekend celebration ever! No discounts or shopping deals can ever replace family relationships and the ever-present shrill of the kids (and one 27 y/o adult child whom shall be nameless).

When the last guest departed, I cleaned up the kitchen while my wife had her own battle – getting over a cold.

Yes, it was a lot of battles yesterday but all were great memories! Hope you had a wonderful Thanksgiving as well.